Select your vehicle to check compatibility!


Not Available to Ship to California

Enter your email address below to get your coupon code.

By submitting this form, you agree to receive emails from us periodically with deals and other information. You can opt out at any time.

The evolution of the entire Injen intake line is paved with industry firsts and innovative designs. Because of how quickly modern ECM’s interpret the information received from various sensors, that allowed the ECM (engine control module) to become smarter and adapt to changes and/or modifications quicker. While seeking to develop an air intake for the modern engine, No matter what intake tube design the R&D department came up with, the ECM would adjust the air/fuel ratio from one hour to the next to compensate for the changes their intake provided. This might not sound like a big deal to most, but Injen Technology intakes rely on two key characteristics to produce power: improved airflow AND a tuned air/fuel ratio to extract every last ounce of safe power. If the ECU was now “tuning” around Injen air/fuel adjustments, this obviously posed a severe problem that required revolutionary solutions.

The challenges that the modern ECM posed were overcome in the fall of 2005, when Injen Technology announced the arrival of The SP Air Intake System. The SP series was equipped with their MR Technology step down tuning process, launching the World’s First Tuned air intake systems. In the winter of 2005, Power Flow was introduced with MR Technology and an all new Power Box. This was another leap forward for Injen Technology. The new product line was displayed for the first time at the 2005 SEMA show and won the International Product Award. Get only the best air intake available for your 2011-2019 Dodge Challenger, Charger & Chrysler 300 3.6L V6 and get an Injen! 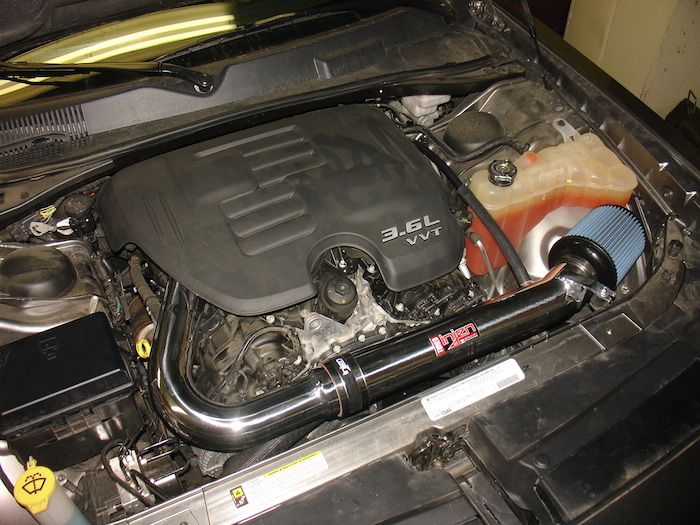 Injen’s SuperNano-Web filter media is a dry synthetic media that outperforms the competition. The media itself is a proprietary base blend of synthetics and cellulose. This blend forms the pulp that is used to make the base media itself. Once the media is manufactured and rolled out, a full synthetic Nano-fiber membrane is applied over the base media. The thing to remember is that cotton and cellulose fibers are larger than synthetic fibers, and have larger spaces between the fibers, causing contaminants to load in the depth of the media and plug the airflow path. This can create higher restriction levels and at times lessen capacity as well. The synthetic fibers in the SuperNano-Web media are submicron in diameter and have small interior fiber spaces, which result in more contaminants being captured on the surface of the media. This helps keep restriction levels low as the filter loads with dirt and containments.

If you look at the picture below, you can see the SuperNano-fiber web on top of the base media. That web helps trap smaller particles and protect your engine.